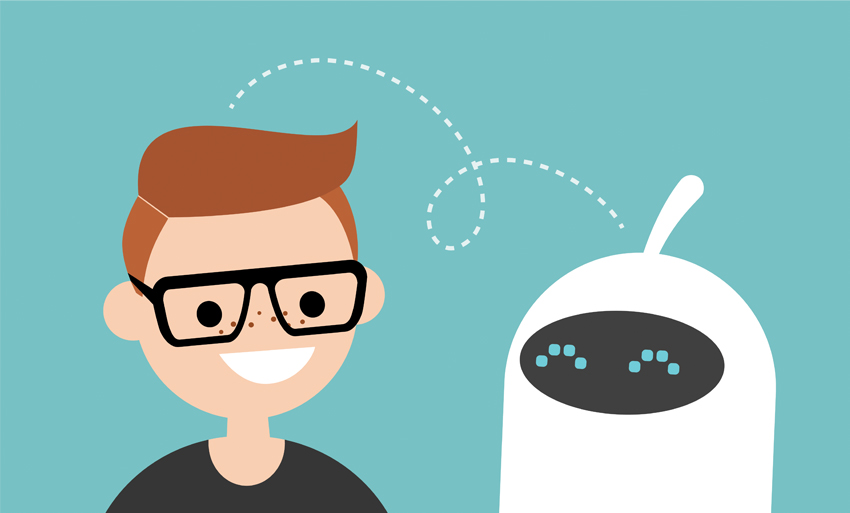 Lately, it is almost impossible to scroll through any news feed without coming across an article about Artificial Intelligence and its predicted impact on digital interactions in the present and future.

Recently, one particular phrase  may have caught your eye- Conversational AI. But what exactly is Conversational AI and where is its place in the current landscape of contact center-based customer experience?

What is it and What Does it Do?

Here is how Amazon’s developer portal describes Conversational AI: Conversational AI systems are computer systems that can communicate with people in ways that feel natural, solve problems, and get smarter over time. In short, it’s what enables us to interact with computers via speech–our most common form of interaction.

A well developed Conversational AI chatbot is able to interact on a near-human level. If we think about it, most companies’ contact and sales centers deal with a core of 6-12 repeating issues. Conversational AI software allows companies to develop an intelligent response channel that can cover the most common customer interactions. The software does this by adapting the data it receives from previous conversations and uses that data to resolve new incoming interactions more accurately and efficiently.

How is Conversational AI Being Used?

One of the more innovative ways to utilize  Conversational AI is to have  chatbots collect survey data to help target key demographics for future marketing campaigns.

According to a quote by Dennis Yang of Dashbot, “Conversational data is richer and more actionable than traditional web metrics.”

Another advantage in using Conversational AI is  from a branding perspective, companies can be assured that their message stays true to their core values and doesn’t veer off course . With AI, the scripts are all written and approved in house. As long as a solid foundation of on-message language is used when building an AI system, then  as the system learns, it will adhere to the appropriate company verbiage.

What is the Future of Conversational AI?

The current applications of Conversational AI can inform us where we may see this technology used in the future. Huge companies, like Apple and Amazon, have leveraged Conversational AI to be used as personal assistants that can continuously direct their consumers towards their own offers.

Nordstrom launched a chatbot service for their 2016 holiday season. The bot would ask  questions about who the user was shopping for, and then use that data to suggest gifts based on their answers. The bot became a personal shopping concierge, guiding mobile app users towards in-store and online purchases.

Staples branded their chatbot service with its popular “Easy” button. The office supply chain teamed up with IBM’s Watson platform to provide a re-ordering process for office managers to use with the goal of integrating as many channels as possible. The result was a streamlined process for customers to easily keep inventory in stock and up to date.

As brilliant and effective as some AI solutions can be, they still have limitations. The gold standard by which AI is measured is something called the “Turing Test”. The test was named after Alan Turing, the English computer scientist who is believed to be the father of Artificial Intelligence. The Turing Test was developed in 1950 to measure a machine’s ability to exhibit behavior that is equivalent to that of a human. In testing, the higher the machine scored, the more human-like it was considered to be.

While companies like IBM, Microsoft, and Google continue to invest billions in AI technology, the available solutions still have yet to pass the Turing Test.

What are the Types of Conversational AI That Companies are Using?

Logical AI – Not AI in the true sense of the term, Logical AI involves a form-fitted script with no capability of processing language. Think of Logical AI like an interactive FAQ section. While Logical AI can be a good tool for customer information, it lacks the ability to adapt itself or widen its range of responses.

NLP – An acronym for Natural Language Processing. This is much closer to Turing Test specifications. NLP driven systems process incoming language in an effort to replicate the conversation for future interactions.

The problem with NLP driven solutions is that the technology is not quite there yet in terms of Turing Test standards. This is why with many NLP bots, users run into issues of the software asking them things like “Would you please repeat that?” or “Hold on while I transfer you to an agent.”

Is There a “Right Now” Solution?

Conversational AI is constantly developing, yet we are still years away from AI being Turing Test-level accurate. However, companies should still embrace the framework that is already in place, and enhance AI technology using solutions that are currently available.

The way to leverage AI solutions while mitigating errors and frustration on the part of the customer is to implement the “AI Kaizen Launch Plan.”

Conversational AI has come a long way in a short time, but it is still far from being able to  act autonomously. To truly and effectively use this technology, companies must look into implementing a human-driven onboarding process where both the AI engine and live agents learn to migrate in tandem to a seamless platform.

How to Reinvent Customer Service–OnScreen