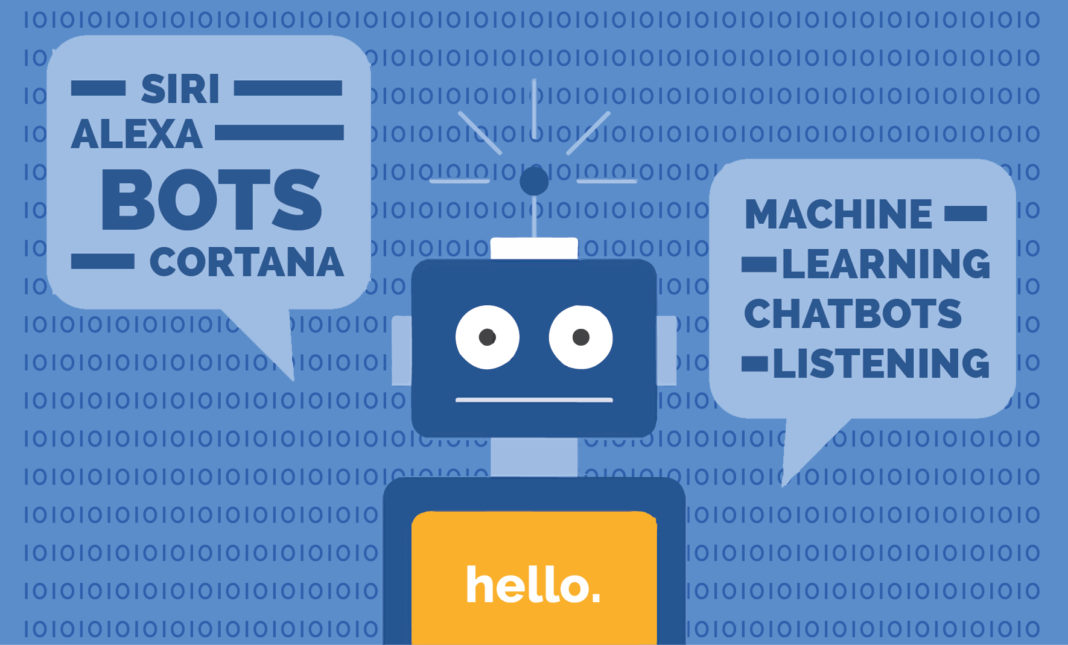 These days, consumers are becoming more and more connected to non-stop content that is based on their personal preferences. This flow of information spills out to people on their phones, tablets, and other machines.

To get access to these data-driven solutions, customers must provide personal information. It’s easier for users to give up personal details when they trust the names of the providers. Names like Siri, Alexa, and Cortana would have seemed like characters in a Greek tragedy five years ago. Now, they come co-branded with the likes of  iOS,Amazon, and Windows.

We have found ourselves in a universe that is driven by a buzzword known as “bots”. Recode describes a bot as “software that is designed to automate the kinds of tasks you would usually do on your own.”

Recently, Jesse Hulsing of Goldman Sachs’ Research commented that “bots” are very popular  right now because “the channels are in place” and “the technology behind bots — machine learning — is really starting to mature and is on a path to continue to mature rapidly over the next few years.”

What is Hulsing referring to when he speaks about machine-learning?

One can look back to the works of Alan Turing, who successfully cracked German ciphers in World War II using his Enigma Machine. In 1950, Turing developed what is now known as “The Turing Test.” This is a test that was set-up to measure if a machine could exhibit the same level of intelligent behaviour as a human.

As an example of putting this concept in place using modern day technology, KiK CEO Ted Livingston has said that “So far, there hasn’t been a killer bot. This is not yet the world promised by the early hype.”

So where and when did the word “bots” find its way into our lexicon?

The use of the term, “chatbots” actually dates all the way back to 1966 when Joseph Weizenbaum developed a computer program called ELIZA. The ELIZA program, named after the fictional character Eliza Doolittle, consisted of about 200 lines of computer code that modeled the “active listening” characteristics of person-centered therapy.

Various forms of chatbots have existed since the development of the ELIZA program. The most impactful iteration of chatbot technology coincided with the dawn of the internet age. The “SmarterChild” chatbot, developed by ActiveBuddy Inc., was a chatbot that interacted with AOL Instant Messenger and MSN.

As bespoken personal computing algorithms and faith in the science of artificial intelligence have developed, we now find ourselves in a landscape where our phones and our personal computers come preloaded with personal assistant bots that can provide us with almost any information we ask for.

It’s no wonder that “bots” has become a buzzword when so many of us rely on these coded forms to tell us anything from the weather to movie showtimes.

But the real question remains: is there any benefit to using coded bots instead of human interaction when interacting with a customer? In a Techcrunch article, Justin DiPietro, our COO, points out that even Facebook supports the claim that human interaction still wins with customers. The article refers to a quote by Facebook COO Sheryl Sandberg who states that “we simply don’t have the technology yet to actually imagine that a bot could replace humans in the sales process.”

While bot software can provide timely and useful information to users looking for static data, the question must be asked: “Is a pre-programmed bot a suitable solution for real-time prospects with real-time questions?”

The answer? Well, let’s be honest. There are certain things that humans are always going to be better at than bots. Here are a few examples:

A bot is only as good as the code that was written for it. When a prospect has a problem or question that exists outside of the box, it is important to have someone there who can provide them with a solution that fits their exact needs. Often, that means being creative.

The act of solving unique and real time issues may take personal interaction and human problem solving skills to deliver actionable and result-based offerings that align with that customer and the solutions available to them.

Trust and transparency can be  powerful when dealing with prospective clients. Consumers don’t want cookie-cutter customer service mumbo-jumbo that sounds like it was developed by code writers based on demographic analytics. Peter Krivkovich, the CEO of Cramer Krasselt has pointed out that “consumers don’t fit into their segments as squarely as they do on your PowerPoint slide.”

Code-based bots can deliver your company’s message, but it will be delivered in a seemingly canned manner that sounds like it came right out of a legal department. This is an age where authenticity is king, and it can be difficult to make a bot come across as authentic and transparent.

Customer interactions are precious in their worth. Maybe the desired outcome is to provide a call to action to continue the conversation with the client. Perhaps the intended end result is to close a sale. While an automated bot can offer a CTA or present contact information to complete a purchase, nothing can replace a well-trained representative’s ability to move the prospect towards the next phase of the funnel. Even the best written bot is not going to be able to identify and move forward with a prospect’s hot buttons or objections.

What’s Next for Bots?

Popular culture is resplendent with films, books and theories regarding the future of artificial intelligence. Someday soon AI may be able to service e-commerce consumers. This is not new ideology. The possibilities of AI have been tested and experimented with for decades.
Remember the Turing Test? For the past 65 years, developers have tried, unsuccessfully, to put together programs that could pass the test to determine if programmed bots could compete with human intelligence. While we have come a long way since Turing’s test and Weizenbaum’s ELIZA, it’s still clear that interactions with humans are going to deliver better results than the current crop of even the best designed software bots.