Home Customer Experience The Evolution of the Contact Center 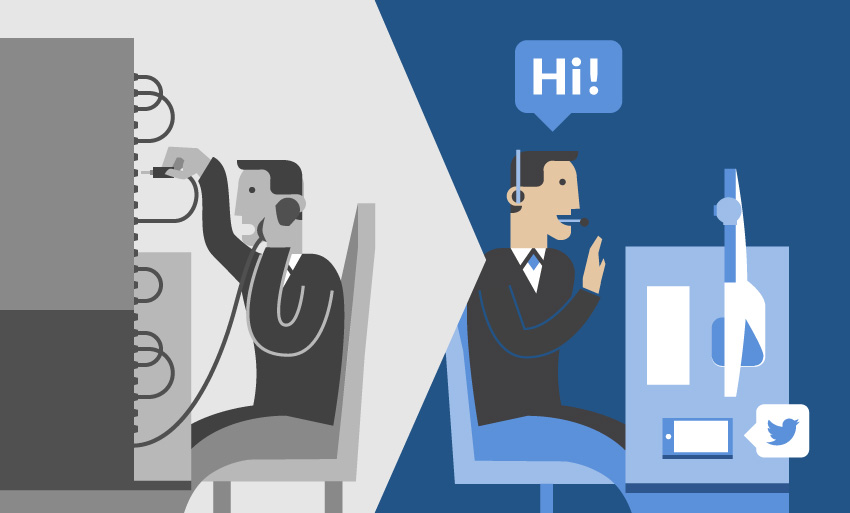 Contact centers (traditionally known as call centers) have always been a crucial part of the customer experience. However, in past decades, the role of contact centers has been drastically evolving in order to meet customer expectations.

When thinking about “call centers”, most people imagine a roomful of robotic customer service agents answering customer support phone calls. But this isn’t necessarily the case as the new meaning of this term now reflects a much wider function.

In order to appreciate where we’re going, it’s important to remember how we got here. Before reflecting on the new standard, let’s take a mini history lesson to understand the evolution of contact centers and then close on what to expect in the future.

1844 started the period of time known as the “Early Communications” era.

Let’s start with the first instance of long distance communication. Samuel Morse, an American painter, and inventor known for the invention of the telegraph and Morse Code (co-inventor, technically), sent the first ever telegraph message. The telegraph was sent from Washington D.C. to Baltimore, Maryland. It was the first major communication innovation of it’s kind.

In 1876, the first successful phone call was made possible by inventor Alexander Graham Bell.

In the 1960s, Automatic Call Distributor (ACD) technology was first introduced. This innovation was the first foundational step towards the concept of the call center (besides the telephone itself!). ACD technology allowed large companies to filter incoming calls and assign them to agents.

The primary purpose behind call centers was to provide more efficiency in business. The 1960s marked the start of a more cost-efficient way for people and businesses to communicate.

During the 1960s, up to the beginning of the 1970s, the Private Automated Business Exchange (PABX) system came into prominence in England. PABX was an automated telephone switching system within private enterprises. The primary purpose of this system was to serve subscription and travel industries.

PABX systems started to include ACD technology, which allowed the development of wide-range contact centers. In 1965, the first instance of a call center using GEC PABX 4 ACD was set up in the United Kingdom at Birmingham Press and Mail.

By the 1970s, the advancement of Interactive Voice Response (IVR) was introduced into call centers. IVR technology allowed a computer (automated system) to interact with callers through the use of voice and DTMF tones inputted via a keypad.

In the 1980s, the term “call center” became widely used. At the same time, the outbound dialer was first introduced, which created more opportunities for call centers in marketing and sales. During this time, call centers became more computer-integrated, which made recognizing callers much easier for agents.

The 1980s through the mid-1900s was the era where the Internet was first introduced to the world, and its invention drove major dynamic growth for businesses of all types.

The Internet created a new channel for customers to reach out to companies with questions, complaints, and compliments. Businesses started developing websites to serve this new medium of contact. The internet brought about the rise of chat, like the one-on-one chat (known today as live chat support), which allowed contact center personnel to interact and serve customers directly.

In 1983, the traditional term “call center” was changed to “contact center.” Technology was responsible for this change, as contact centers were beginning to take on a multichannel environment thanks to the Internet.

ARPANET adopted TCP/IP on January 1, 1983, and from there, researchers began to assemble the “network of networks.” But it wasn’t until 1990 that it took on a more recognizable form.

In the 1990s, online chat became more popular, making online web chat possible. By this time, CRM software was also starting to develop. This marked the start of a new level of providing a better customer experience for businesses.

By the mid-1990s, electronic mail, (or “email” as it is known today) was introduced. This tool would become the most popular communication means for consumers all over the world.

At this point in time, companies starting taking advantage of available technology that allowed them to place online ads, but they were still not able to properly calculate metrics around how many people would see these ads. As a result, companies were struggling to cope with orders and demand. Customers had multiple channels from which to contact companies, which confused customer support employees. Though online ads provided many opportunities for businesses, they also represented challenges for companies trying to scale their services and fulfill operations.

Despite these struggles, more innovations kept popping up around this time, which resulted in continuous improvements for contact centers.

The Private Branch Exchange (PBX), a private telephone network used within a company, began its own set of improvements. These improvements lead to cost-savings for internal phone calls.

From the 1990s to early 2000s, cloud technologies were also introduced – notably Salesforce.com in 1999. Salesforce delivers enterprise applications through their website and software solutions.

By the early 2000s, social media and mobile use were on the rise. Social media provided a new point of contact for customers looking to connect with brands, and mobile phones made it easier to get in touch, affecting overall call volume. Brands seized the opportunity to take these tools into account within their customer service departments.

In 2007, the first ever iPhone was released – another big turn for mobility and communications. The move from simple mobile phones to smartphones represented a new way for companies to stay in touch with consumers.

By 2011, Workforce Optimization (WFO) solutions were introduced. These solutions helped customer service agents with time management and helped them to create a structure for dealing with high-volume call hours.

In 2014, software solutions were created to manage the web, email, mobile/phone, social media, SMS, and other channels (also known as single omnichannel). Glia is a great example of an enterprise-level omnichannel platform because it integrates the data gathered from each of these customer touch points, allowing agents to act on it in an organized fashion.

Technology will continue to push the limits for what the contact center will become. We believe the contact center of the future will be one where context ultimately directs the customer experience to a place where minimal customer effort is needed. At Glia, we believe we’ll see Bots becoming more prevalent, but in a way where they serve as a supplement to humans – not a replacement.

The Times They Are a-Changing: Talent in the Contact Center Part 2: Players and Coaches