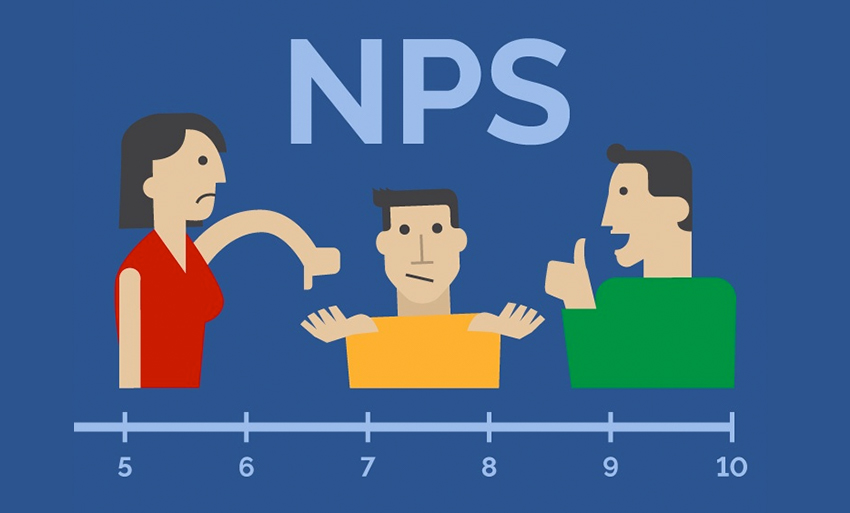 To understand NPS (Net Promoter Score), ask yourself how likely you would be to recommend your last clothing purchase on Amazon to a colleague. Your response to that question, referred to as the “Recommend Question” by Net Promoter Network, defines how valuable you are as a customer to the clothing company. If your response is that it would be very likely that you would recommend the brand, you are considered a promoter for the company and extremely valuable to that brand. The more promoters a brand accumulates, the higher the brand’s NPS.

What Is NPS and Why Does It Matter?

Net Promoter Network describes the NPS methodology, which asks customers to rank how likely they are to recommend a company or service on a scale of 0 to 10. Customers who select a score between 0 and 6 are deemed detractors because they dislike the brand and would be likely to give a negative review. A customer who selects a score of 7 or 8 is an unenthusiastic respondent. This person is a “passive” customer and one at risk of being snagged by a competitor product. Customers who select a score of 8 to 10 are referred to as “promoters” and are highly likely to recommend the product to a friend. The NPS for a firm is calculated by subtracting the percentage of detractors from the percentage of promoters, giving a score ranging from -100% (this would happen if all customers were detractors) to 100% (if all customers were promoters).

It was Frederick F. Reichheld and a Bain & Company team who created the recommendation question and identified it as the one question that, when posed to consumers, directly correlated with desirable customer behaviors such as repurchases or positive referrals. An article by the company describing the NPS system explains that the correlation is significant because these actions are central to a company’s success. Emerging big data technology that incorporates NPS methodology provides companies with the ability to store and analyze customer activities, assess consumer satisfaction with their products, and provide just what the consumer desires.

The Implications of the NPS Score

Reichheld and his team found that a high NPS indicated that a brand was a potential market leader; however, the values considered to be a high NPS vary across sectors because of product dynamics and cultural behaviors. The research team also found that high-scoring firms grew at double the rate of their competitors. Reichheld described his theory of NPS in an article in the Harvard Business Review in 2003. He explains why a focus on the most satisfied customers stimulates business growth. Reichheld had hit on something astonishingly apt in an era of ecommerce and consumer engagement.

NPS as a Benchmark

An article by Rob Markey and Fred Reichheld published by Bain explains that the score can be analyzed “…by business, geographical region or any other segment, and you can track it from week to week to see how your loyalty-building efforts are working. It’s both your customer balance sheet and your ethical compass.”

The score encourages a firm to conform to consumer preferences, adhere to ethical practices, and maintain organizational tenets. Markey and Reichheld quote Schwab CEO Walt Bettinger as saying, “NPS provides a litmus test of how well we are living up to our core values.”

The Social Times reports that over 80% of consumers perform online research or a Google search before buying a product. It is crucial, then, that customers are promoters and not detractors. Moreover, if consumers are posting the information that is desired by other consumers, they are assuming the marketing role through their online and e-commerce activities and at minimal cost to the brand.

NPS as a Marketing Defence Strategy

The downside of the ecommerce stratosphere is that negative consumer sentiment rapidly diffuses, and companies that may be less effective in consumer management may spend substantial amounts of time and money monitoring and managing negative word-of-mouth. Astudy by Martin Williams and Francis Buttle published in the Journal of Marketing Management found that organizations devote far more resources to the management of negative word-of-mouth than they do to the promotion of positive word-of-mouth, a reactive strategy that inhibits growth. Ecommerce retailers are busily managing online customer feedback platforms and social media pages in damage control efforts.

Companies that experience rapid growth and thus garner investor confidence encourage loyal customers to promote their brand by offering incentives for doing so. The Harvard Business Review reported in 2007 that Sprint PCS was offering a service credit of $20 to any customer for a referral and a service credit of $10 to individuals referred in this way and who actually became a new customer. McKinsey discusses the intentional word-of-mouth efforts by firms that include identifying influencers or promoters and molding them into brand advocates. It is a highly effective strategy.

Not only is NPS an obvious indicator of a company’s ability to harness the value of the consumer, it is an indicator to investors of that company’s potential, as the e-retailer Bonobos can attest.Bonobos founders, Andy Dunn and Brian Spaly, both Bain & Company protégés, closely monitored their NPS when they launched the company in 2007.

Delighted, a SaaS start-up launched in 2014, provides NPS-facilitating software that gathers and analyzes consumer data. According to Delighted, the Bonobos founders were inspired by other e-tailers whose success appeared linked with acute customer-oriented strategies, Zappos for example. Bonobos wanted to provide a unique, bespoke online men’s pant retail service and exceeded expectations. According to CrunchBase, the brand is now the largest ever ecommerce apparel brand. In terms of funding, the company has received a total of almost $128 million withAccel, Coppel Capital, and Nordstrom providing significant investment capital.

Although the success of Bonobos cannot be wholly attributable to a focus on achieving a high NPS – at least some credit must go to product quality and frontline employees who deal directly with the customer – a company focus on a unique and satisfying consumer experience appears to confirm the power of a customer-centric strategy and the broad premise of NPS.

Savvy marketers understand that engaging loyal consumers in online interactions and communication promotes brands, influences potential consumers and investors, reduces the costs of customer acquisition measured by marketing efforts, and is a sure path to rapid growth.

The Dangers of the Digital Disconnect