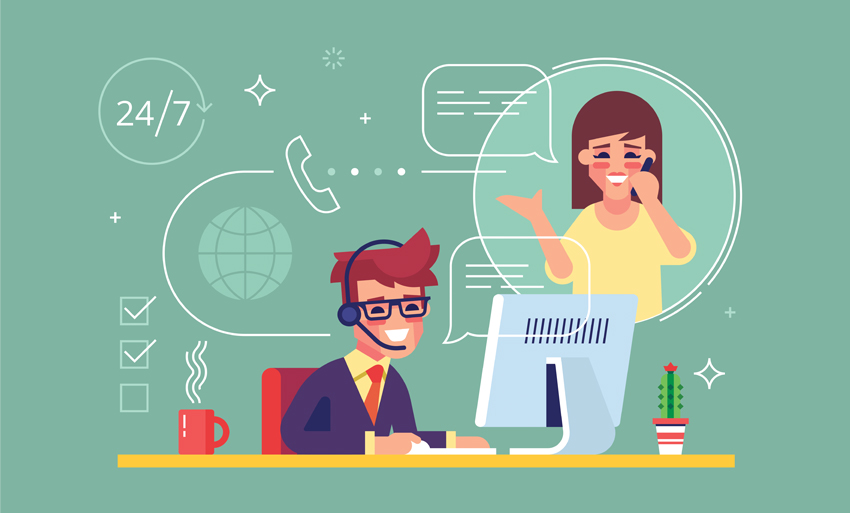 Like it or not, the traditional phone call is still the primary method for many customers to engage with companies for support. However, the phone’s place in the customer journey has changed quite a bit. In the past, the origin of a customer phone call was pretty straightforward. Customers would look up a number in the big yellow phone book and dial. With regard to customer-to-company communication, the phone was pretty much it (aside from writing and mailing a letter). In order to handle the inbound phone calls and better support customers, companies began creating call centers.

As technology evolved, so did the phone – moving from traditional land-based lines that tied a caller to one location to cellular-based lines that allowed someone to make a call from virtually anywhere. While technology created new channels for customers and companies to communicate (web chat, messaging, etc.), the phone maintained its position as the number one option.

Calls eventually became a little more complex and their place in the customer journey became slightly more complicated. The origin of the calls also became less straightforward. The retrieval of a company phone number can now occur in many different locations – both physical and online.

With the internet’s rapidly growing popularity, phone books were slowly driven to extinction. People were increasingly looking for phone numbers online – either in a search query or on a company’s website directly. Today, nearly 70% of phone calls originate online and take place while the caller is in front of a digital screen (either desktop or mobile). These calls are known as “on-screen” phone calls.

There are many benefits to on-screen calls. First and foremost, the proximity of the screen (either on their smartphone or computer) means that it is fairly easy to transition a customer to an assisted online engagement where, depending on the situation, support might be easier.

In many cases, on-screen calls are the result of an on-screen issue. Through cutting-edge technology, these calls can easily be matched to a corresponding web browsing sessions. This allows a company agent to see what’s happening on the callers screen, while providing phone support. As you can imagine, this visual context greatly improves the effectiveness of the agent and often leads to first-call resolution (FCR) and decreased average handle time (AHT).

Some of the best technology to facilitate this has been created by Glia.

While a majority of today’s calls are on-screen, there are still many instances where calls originate “off-screen”. Phone calls where the number is acquired from sources such as billboards, newspapers, magazines, or television are examples. These calls are a little tougher to transition the caller to an assisted online engagement since they may not be near a computer or already in a digital environment on their mobile device, but providing company agents with visual context is still possible.

This can be done by leveraging unique dial-in phone numbers that are associated with a specific point of origin. When a call is received, the company agent can be shown the exact image (and possibly location) where the phone number was acquired by the customer. Having this information is invaluable, as the agent can begin the engagement with direct knowledge of what triggered the call.

Support calls aren’t going anywhere anytime soon. However, the way that the calls are transmitted will most likely change due to the unprecedented shift to mobile.

In the future, all calls will most likely be data-based and there will be a shift from phone calls to audio chats. This shift carries huge benefits – namely the ability to initiate from virtually any digital origin without having to app or channel switch.

For example, if you were in your favorite airline mobile app and clicked a phone number to call them, you would be pulled out of the airline app and pushed into your phone app. This removes all context for the airline representatives that you’re connected to and forces you to have to switch back to the app to reference any data contained therein.

A shift from phone calls to voice chat though would allow you to remain in the airline app while connecting your call. It also maintains the context – allowing an airline agent to potentially see where in the app you were and to navigate you through the app with CoBrowsing if needed.

While technology is providing new ways to engage and communicate, the phone remains an integral channel for customer support. But, the phone as we know it today is ripe to change, in our minds, for the better. A move to audio chat opens new avenues to deliver a more positive customer experience. Are you ready to meet this change?

The Dangers of the Digital Disconnect