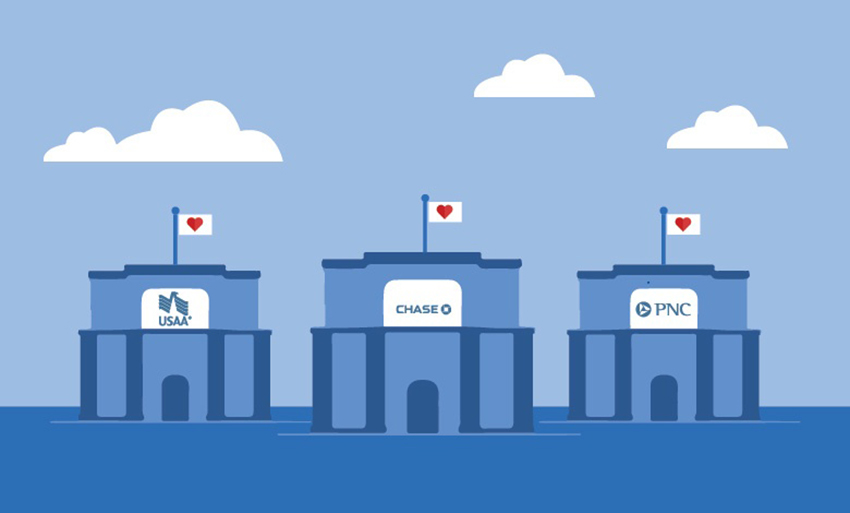 We’ve discussed the strong numbers behind these strong customer experience strategies and taken a look at how they impact banks positively. With banks moving beyond their sole focus on competitive rates, here are three banks which excel at shaping an outstanding customer experience and have a reputation for strong revenue gains to boot.

USAA
USAA is known for its stellar customer experience tailored specifically to active and retired military personnel and their families. Despite having a mere 17 branches nationwide, they scored big in the 2015 Temkin Ratings with a first place ranking. Temkin measures the quality of customer service received by customers through feedback gathered and rated. With a Temkin Customer Service Ratings (TCSR) score of 79%, USAA scored a full 4% higher than the next highest rated company.
A largely online bank, USAA has its customers highly satisfied with their understanding that a niche market for military personnel exists in the US. In fact, their website lists their numerous customer experience awards over the years. USAA’s customized experience for their clients has contributed to its high revenue stream. The company consistently ranks on the Fortune 500 list of top performing companies.

Chase
Chase is another institution known for its strong retail banking customer experience. In the2015 J.D. Power US Retail Banking Satisfaction Study, Chase consistently ranked better than other US banks nationwide, scoring better than average customer experience ratings in more than 50% of the regions they have retail locations in. Despite average interest rates (their basic savings accounts only accrue 0.01%), Chase is the US’s largest bank by assets with 13% of the banking industry’s assets.
Why? In addition to its retail banking customer experience success, Chase’s commercial banking division also tops customer experience rankings. They came in first in the 2015 CFO Commercial Banking Survey. The survey asked respondents in-depth questions about how efficiently their bank handled transactions as well as their overall satisfaction with their current bank. Chase’s customer experience strength overcomes its modest interest rates to achieve a profitable business.

PNC
Credio’s 2015 US Banking Satisfaction Report saw PNC rated one of the top financial leaders for customer experience. Among various factors, their customers noted that they felt highly valued, with PNC achieving a 7.02/10 compared to the industry average of 6.71. On top of that, PNC received the second highest score for recommendation ratings, or how likely a customer is to promote it to their family or friends. Adding to their Credio rating, PNC achieved an above average score of 62% in the 2015 Temkin customer satisfaction survey. Both these rankings serve to boost PNC’s status as a banking customer experience leader in the US.
It is noteworthy to point out that credit rating company Moody’s upgraded PNC’s deposit rating in 2015. In the same report, the credit rating firm affirmed PNC’s Prime-1 rating- a rating that determined the bank has a “superior ability” to repay short-term debt obligations. PNC thus joins USAA and Chase as forerunners in the industry that demonstrate economic viability alongside uncompromisingly outstanding customer experience.